Champions League draw - who got who? 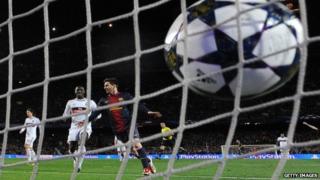 For the first time since 1996 there are no English clubs in the last eight.

Manchester United and Arsenal were knocked out in the round of 16, while Scottish representatives Celtic were eliminated by Juventus.

Arsenal boss Arsene Wenger responded to seeing his side lose out to Bayern Munich on away goals by saying it is a "massive wake-up call" that no English clubs made it through to the quarter-finals.

Meanwhile, Chelsea, Tottenham and Newcastle have been kept apart in the draw for the Europa League quarter-finals.

Both teams have home advantage in their first legs, while Newcastle travel to Portuguese giants Benfica in their tie.