Who's in the England squad? 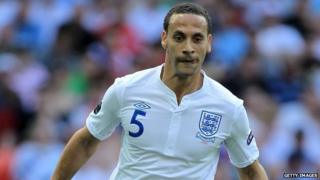 Rio Ferdinand has been recalled to the England squad for the World Cup qualifiers against San Marino and Montenegro.

The Manchester United defender's last England appearance was in June 2011.

Goalkeeper Ben Foster is also named for the first time since asking former manager Fabio Capello not to pick him in May 2011.

Tottenham Hotspur duo Scott Parker and Michael Dawson are also back in the squad.

Dawson's last international appearance was against Wales in March 2011. It's the first time he has been selected by Roy Hodgson.

Injury problems have kept Parker out of the England squad since last summer's European Championship finals.