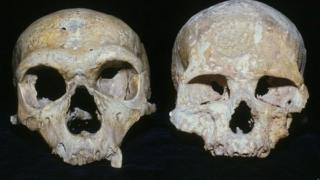 A study of Neanderthal skulls suggests that they became extinct because they had larger eyes than our human species.

More of their brains were devoted to seeing in the long, dark nights in Europe, rather than deeper thinking.

This ability enabled our species, Homo sapiens, to make warmer clothes and socialise more, helping us to survive the ice age in Europe.

Neanderthals are a closely related species of human that lived in Europe around 250,000 years ago.

They lived briefly with our species until they went extinct about 28,000 years ago, in part due to an ice age.

Neanderthals were close evolutionary cousins of our own species, Homo sapiens