Pope vote - all eyes on the smoke 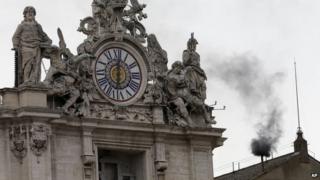 Black smoke has come from the Sistine Chapel's chimney again this morning, so still no pope has been chosen.

Today is the second day of the papal elections that are being held at the Sistine Chapel in Vatican City in Rome.

Yesterday there was a single vote in the evening, and there has been one vote today so far.

Up to four ballots will be held each day, until one person gets two-thirds of the votes.

People will be watching the colour of the smoke from the Chapel's chimney in the Vatican City.

Video: How will the Pope be elected?