Pope vote - What's going on behind the chapel walls? 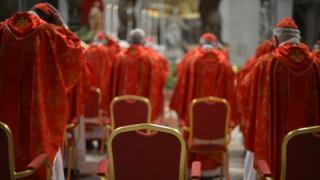 One of the world's most secretive elections is now under way - so what goes on behind the Sistine Chapel walls during the papal election?

The cardinals taking part in the vote are now locked in the Sistine Chapel in Vatican City. They will only be allowed to leave once the new pope has been chosen. This rule came into place after the election in 1268, because in that election the cardinals took three years to vote! After that it was decided that the cardinals should be locked in until they've made a decision.

No mobile phones, no TV, no twitter... the cardinals are not allowed any contact with the outside world for the duration of the voting. The process must be kept top secret, so before the conclave starts the chapel is inspected to make sure there are no hidden spying devices.

In the past the cardinals had to sleep on hard beds in the chapel and instead of a toilet they had to use a chamber pot. (This is an old-fashioned toilet which is like a big ceramic bowl) But since 2005, the cardinals have been staying in a special guest house nearby, which has 130 rooms. Reports suggest they now have portable chemical toilets instead of the chamber pots.

On the first day of the election each cardinal will vote once, after that they will have to vote twice in the morning and twice in the afternoon until a new pope is chosen. When the cardinals vote they write on a slip of paper, but they have to try and disguise their handwriting. After each vote the slips are counted and then sewn together then burned.

It is the burning of these papers which cause the smoke that can be seen coming from the chimney on the Sistine Chapel. A special chemical is used to make the smoke appear as different colours. If the smoke burns black this means the voting hasn't finished, but if it burns white this means a new pope has been chosen. However, white smoke sometimes doesn't look very white when it blows out into the sky, so they ring the chapel bells too. 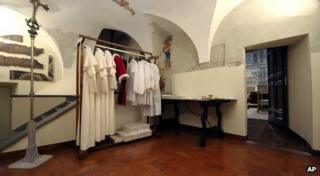 As soon as the new Pope is elected, they are presented to the public. This means they walk out on to a balcony that overlooks St Peter's Square, and to do this they must be dressed in the papal robes. So, in the weeks leading up to the conclave tailors are busy making several robes and dressings all in different sizes, so whoever is elected has garments that will fit.

It is said that when a pope is chosen he is so overcome by emotion he begins to cry. Though this may not be true of every pope, it has happened often enough that the room which the new Pope walks through before he walks out on to the balcony, is called 'the room of tears'.