Challenges faced by the new Pope 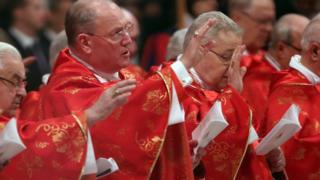 Pope Francis has many challenges to face as he becomes the leader of the Catholic Church.

These include long-standing issues that not all Catholics agree on, such as whether priests should be allowed to marry and what the role of women should be in the Church.

Some people think the Church should be more modern but others want the new Pope to stick by the Church's traditional teachings and pleasing everyone will be very difficult.

Recently the Church has also had to deal with some very serious problems, such as accusations it didn't do enough to stop some priests treating people badly.

The new Pope will be expected to tackle all of this and reassure Catholics that such harm will not happen again.

Another tricky issue will be how he will manage the Church's relationship with other religious groups, including Jews and Muslims.