What does the Pope do? 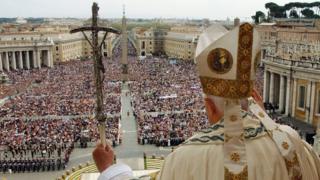 The Pope is seen as the successor to Saint Peter, one of the Christian Church's early leaders and one of the 12 apostles of Jesus.

There have been popes since the early days of the Christian faith.

The Pope is leader of the Catholic Church, the world's largest group of Christians.

His decisions affect over a billion followers around the world.

He's also in charge of the world's smallest country. It's called Vatican City.

The Vatican is so small that it's inside Rome, the capital city of Italy.

Turning a street into a classroom