Black smoke has been seen billowing from the chimney on top of Sistine Chapel tonight - which means a new Pope hasn't been chosen yet.

Following the resignation of Pope Benedict XVI, 115 cardinals - the Catholic Church's most senior priests - have travelled to the Vatican to make the decision.

Video: How is a pope chosen?

A cardinal needs to get at least two-thirds of the votes to become the Pope.

The ballot papers used are burnt after the vote, and the smoke drifts out of the chapel's chimney.

White smoke means the new Pope has been chosen. 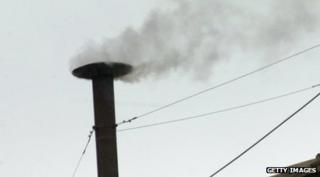 Getty Images
At the last elections, it took two days for the Pope to be elected and white smoke to appear.

If the smoke is black, it means the cardinals are still making up their minds, and then from Wednesday two votes will be held each morning and afternoon until a decision is made.

If no result is reached by Friday, the cardinals will take Saturday off for a day of prayer and reflection.

The voting is held in secret and special technology is being used to jam any mobile phones or other devices which could breach the strict secrecy process.