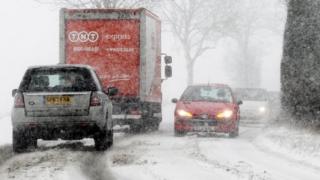 Snow forced hundreds of drivers to get stuck in long queues and some had to spend the night in their vehicles.

The worst affected areas are Sussex and Kent in England, where several centimetres of snow fell, and some major roads had to be closed.

Police said snow and ice had caused hazardous conditions and they tried to help gritting lorries through to treat the roads.

The Met Office has issued an amber "be prepared" warning for some parts of Sussex and Kent, with about 10cm of snow expected on the ground Tuesday morning.

Send us your wintery pictures to: newsroundpix@bbc.co.uk

If you send us a picture, it may be published on the Newsround website, and some photos may be used in our TV bulletins. We'll use your first name and your home town to show that it's your picture; your personal details won't be used for anything else.

Check out our snow picture gallery!