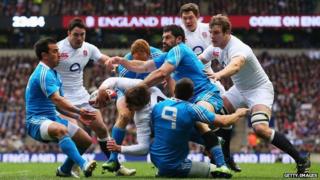 England beat Italy 18-11 to make it four wins out of four in the Six Nations.

They'll now travel to Cardiff to play Wales next week aiming to win their first Grand Slam since 2003.

England's Toby Flood scored all 18 points with his boot in a game and Luke McLean scored the only try of the game for the Italians.

England boss Stuart Lancaster will be happy with the win, but was less pleased with his players' performance.

"At half-time we weren't quite accurate enough but we still felt in control of the game, but I felt we let that control slip and Italy pushed us right to the end.

"We got the win today but it's a quiet changing room and we'll take the lessons out of this," he said.

The final round of games takes place on Saturday 16th March.