Chelsea fight back to earn replay 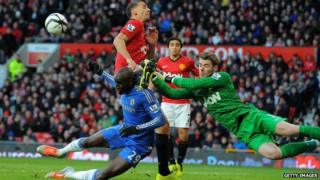 Chelsea fought back from two goals down to snatch a 2-2 draw against Manchester United in the F.A. Cup quarter-finals.

United had got off to the best possible start with early goals from Javier Hernandez and the recalled Wayne Rooney putting them in complete control.

But second half goals from Eden Hazard and Ramires drew Chelsea level.

And Rafa Benitez's side could have even snatched the win when Juan Mata went close late on.

In the day's other quarter-final Millwall and Blackburn shared a combative 0-0 draw.

It was hardly a thriller at The Den, but with a last-four place at stake Blackburn had to defend for the majority of the game.

The two teams will now play on Wednesday still in the hat for the draw.

Wigan will face the winners of that match in one semi-final, while Manchester City will play the winner of the Chelsea and Manchester United replay.