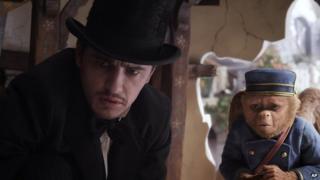 Oz the Great and Powerful is a new film about an old film you've probably heard of and seen - The Wizard of Oz.

This film came out a long time ago in 1939 but is a classic that we're sure your parents or grandparents have made you watch? No!? You should see it as it's brilliant!

Anyway, whenever a big Hollywood blockbuster comes out, we send Newsround's very own movie man off with a pack of popcorn to check it out.

Now! Rated PG so just ask your parents if it's OK to see it.

This movie is set before the Wizard of Oz and tells the story of how the wizard came to the magical land and became king. It follows a magician who lives in Kansas and works in a circus. He's very naughty and whilst being chased by someone he escapes and accidentally gets carried in a hot air balloon to the land of Oz. When he gets there everyone thinks he's the amazing wizard they've all been waiting for that will save them from the Wicked Witch. But can he change his ways and become the hero he needs to be?

You'll recognise Oz as one of the main characters from the Spider-Man trilogy. The rest of the cast are really famous actors and actresses but this is their first major kids film, so you might not know them yet.

If you like your movies with lots of weird and cute characters then I'd say yes it's definitely worth a watch. It's not as good as a lot of other kids films that have come out recently though.

Visually it's brilliant with the amazing land of Oz brought to life in 3D, but there are too many characters and the story moves along too fast to really get sucked in. It could have been a lot more funny in parts too.

The action is good when it gets going and the ending is really cool: we won't tell you what happens!

Overall it's worth a watch although I suggest you watch the original Wizard of Oz first as you'll enjoy it a lot more!