Comet to appear in UK skies 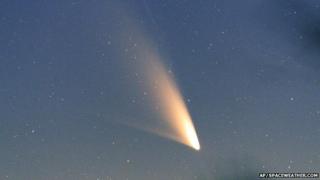 A bright comet could be visible in the skies above the UK from Friday night - as long as it's not cloudy!

The icy mass has the snappy nickname "C/2011 L4 Pan-Starrs" and should be visible with binoculars or a telescope.

Astronomers in countries like Australia have already spotted the comet and some reports say it was as bright as the stars in the Plough.

When can we see the comet?

The 12 and 13 March are probably the best nights to take a look - as long as it's a clear night. 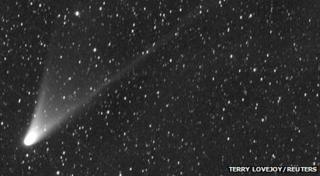 The comet was snapped above Australia in February

"After sunset, scan the horizon roughly in the western direction. On the 12 and 13 March, there is a nice association with the thin crescent Moon."

"You can use the Moon as a guide, and search just down or to the left of the Moon. Through binoculars you should be able to see the head of the comet and certainly the two types of the tail."

How often does the comet appear?

The comet was first discovered in June 2011 by a telescope in Hawaii. Astronomers saw a faint object more than a billion kilometres away.

This could be the first time the comet has passed through the inner Solar System and it might not return for another 100,000 years.

On 10 March, it will make its closest approach to the Sun.

After 13 March the comet will begin to appear higher up in the night sky and by April will vanish back into the depths of space.