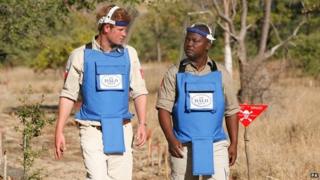 Prince Harry is to follow in his mother's footsteps by supporting a mine clearing charity called HALO Trust.

Harry has agreed to be the patron of the charity's 25th anniversary appeal.

His mother, Princess Diana, was a huge supporter of HALO when she was alive, famously walking through a cleared minefield in Angola on one trip to Africa.

A Palace spokesman said: "Prince Harry is delighted to support the charity in it's 25th year."

Harry has also become patron of the Rugby Football Union's All School programme.

The aim is to get 750 more schools playing rugby by the Rugby World Cup in 2019.

The third in line to the throne is a big fan of the game and has even worked for England's Rugby Football Union as a level one coach.

Ian Ritchie, the RFU's chief executive said: "We are delighted that Prince Harry has pledged his support. Its an extremely important initiative."