Celtic crash out of Champions League 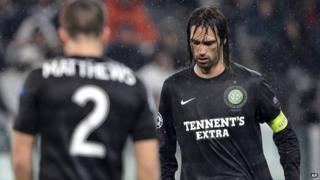 Scottish champions Celtic are out of the Champions League after losing 2-0 away at Juventus.

The Italian side cruised in to the last 16 of the competition by completing a comfortable 5-0 aggregate win.

Celtic started well, but after Fabio Quagliarella scored for Juve their chance of a remarkable comeback faded away.

Hoops boss Neil Lennon said: "The difference was the quality in the final third."

On reflection though Celtic have had a great season in Europe, beating Barcelona and Spartak Moscow along the way to the knockout stages.

Now the challenge for Neil Lennon is to keep hold of some of his best players.

"Some of them want to progress their careers maybe out of Scotland and it is difficult to stop that progression.

"We're doing our job. We're bringing these young players in, we're developing them and hopefully selling them on for significantly more than what we brought them in for."