Welsh pop star Bonnie Tyler will sing for the UK at the Eurovision Song Contest, the BBC has confirmed.

Who is Bonnie Tyler? 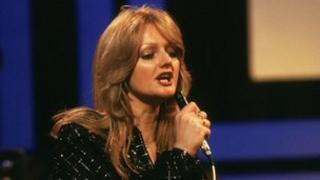 Bonnie is 61 and was a big star in the 1980s and topped the chart with her song Total Eclipse Of The Heart.

Although she hasn't had a hit song in almost 20 years, Bonnie says she's ready to perform in front of an estimated 120 million viewers.

"I promise to give this everything that I've got for the UK!" she said.

Bonnie will perform a song called Believe in Me which was specially written for the competition.

The final of this year's Eurovision Song Contest takes place in Sweden on 18 May and will be broadcast on BBC One HD.