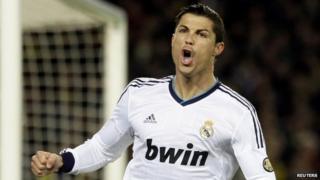 It's the game of the season so far - Manchester United v Real Madrid at Old Trafford, for a place in the Champions League quarter finals.

And the question Sir Alex Ferguson will be pondering is: how do United stop Cristiano Ronaldo?

The former United star is in the form of his life - perhaps the best player on the planet right now.

The tie is finely poised at 1-1 from the first leg.

As Real Madrid boss Jose Mourinho says, "the world will stop to watch" this one!