Blue Peter on the hunt for a new presenter 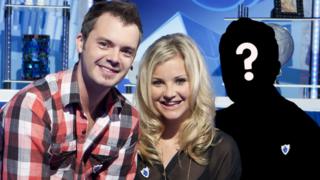 Blue Peter will hunt for a new presenter in a new CBBC series to be shown this summer.

Hopeful presenters will face a series of tough challenges and be eliminated one-by-one.

The winner of the series will join Barney and Helen as a Blue Peter presenter.

The show will be hosted by CBBC stars Dick and Dom and CBBC viewers will get to choose one of the challenges the hopefuls face.

How would you put a new Blue Peter presenter to the test?

Sorry this chat page is now closed, but here are some of the best comments we received.

"To learn how to do loop the loop twice in a jet plane in one day."

"I would send them into the jungle for a week and put their abilities to the test."

"I would put them through a series of random and mad tasks (e.g.. eating odd stuff, having a bath of jelly) and see how they react and take part. The one who is funniest and does most wins!!"

"I think that they should have to climb up the rock face of a mountain and then abseil down at the end."

"Send them to space with the dog Barney."

"I think I would get Helen and Barney to throw custard pies at the new presenter to see if he/she has a good sense of humour!!"

"My challenge is for the presenters to swim through an icy lake."

"I think there should be a dance competition."

"I think the new presenter should be put up to the test by being blindfolded and eat gruesome things!"

"I think the challenge should be the hardest yet, something like abseiling down the Shard, or going head to head with Frank Lampard, Christiano Ronaldo or even Lionel Messi in a penalty shootout."

"I think the new presenter should be tested to sail around the whole of UK and when they get back, get them to cycle from Land's End to John O'Groats."

"I think they should go into a haunted house where it's really dark and spooky with ghost noises and special effects to make it look like there's ghosts and skeletons. To be the winner they have to stay in there over night.

"I think we should put a new presenter to the test by getting them to climb Mount Everest."

"I think they should try to eat 6 small pies in a minute."

"I would make them skydive while saying the alphabet backwards. It would prove bravery and skill."

"Ride a camel into the studio."

"I would put a new Blue Peter presenter to the test by putting them in a cage with lots of insects."