Thailand's prime minister says she will make trading ivory in her country illegal.

It's already illegal to trade ivory between countries - but ivory taken from elephants in Thailand can be bought and sold within Thailand.

Criminals take advantage of the law and sell ivory from African or Chinese elephants illegally. 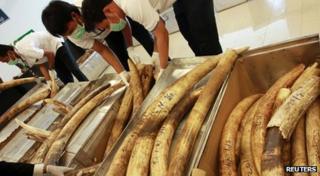 It's thought between 50 and 100 African elephants are killed every day for their ivory which is used to make ornaments and jewellery.

Animal charity WWF says Thailand's ban is a big step forward in the fight to protect the world's elephants.

The WWF told Newsround: "It's obviously a great step forward, but we all have to keep up the pressure for change."

"We need to see a timeline for the ban because elephant poaching is already at crisis levels."

The prime minister's announcement was made at a conference called the Convention on International Trade in Endangered Species.

It's taking place in Bangkok in Thailand and is being held to try and ban the buying and selling of some animal parts, including ivory.

Officials from 178 countries are taking part.