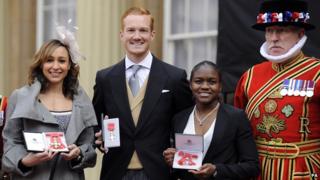 Jessica Ennis now has a new medal to add to her Olympic gold.

The heptathlete, along with boxer Nicola Adams and long jump champion Greg Rutherford were presented with special honours from the Queen at Buckingham Palace.

Ennis was awarded a CBE, while Adams and Rutherford were given MBEs for their services to sport.

After the ceremony Ennis said the Queen had told her "the summer was amazing" and asked how her training was going.

Newsround caught up with Nicola Adams before she picked up her honour on Thursday.

Nicola, who grew up in Leeds, became the first female boxer to win an Olympic gold medal at London 2012.

Twice a year the Queen honours people who have made an outstanding contribution to society. They can receive a special title like MBE, or are knighted and become a Sir or Dame.