Fish fossil is a clue to ancient fish with weird teeth 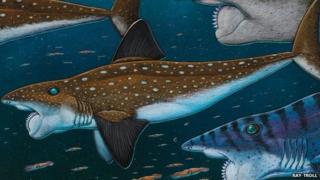 Scientists have used a fish fossil to find out what an ancient fish looks like... and it has really weird teeth!

It's called a Helicoprion and it lived 270 million years ago.

Until now, scientists knew the fish had some sort of spiral-shaped teeth, but they weren't sure how they worked.

The scientists found that the spiral was connected to the fish's lower jaw, in the back of the mouth. 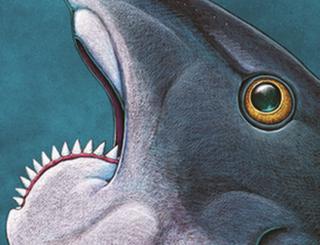 An artist's impression shows how the teeth were positioned

Teeth instead of a tongue

Dr Tapanila, one of the researchers, said: "Imagine that... instead of having a tongue, you have this large spiral of teeth."

He explained that when the fish catches food it closes its mouth and the teeth spin backwards.

This helps the fish eat its prey which is thought to be squid.

The Helicoprion may have been bigger than a man too, as the scientists say the fossil could also show they were more than seven metres long.