One Direction to star in The Beano comic 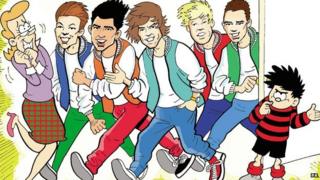 One Direction have been made into cartoons in The Beano comic to raise money for Comic Relief.

In the story, the boyband help Beano characters Dennis The Menace and Minnie The Minx put on a charity show.

The One Direction boys said "We've grown up with the magazine so now to actually appear in it with Dennis and Gnasher themselves is incredible."

The boy band will be in the monthly spin-off magazine BeanoMAX and goes on sale 6 March.