Spurs up to third in Premier League 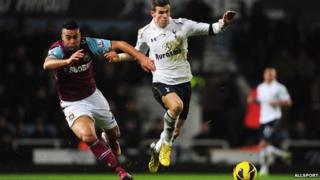 Tottenham Hotspur are up to third in the Premier League after a goal from Gareth Bale.

The Welshman struck in the last minute to earn Tottenham a 3-2 win over London rivals West Ham.

It was Bale's eighth goal in six matches and his 19th of the season.

The win went down well with Spurs manager Andre Villas-Boas who said "He inspires people and he is a direct influence on every single player."