Astronomers have worked out where a meteor that fell over Russia earlier this month came from.

They used videos from camera phones, CCTV cameras and traffic cameras to calculate the height, speed and position of the rock as it fell to Earth. 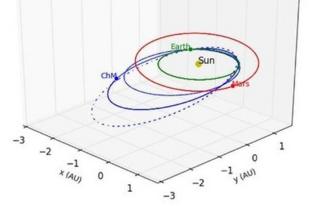 This diagram shows the meteor's orbit (labelled ChM) around the Sun

Then they worked out its orbit around the Sun and think the meteor was one of the Apollo asteroids - a cluster of asteroids that cross Earth's orbit.

Dr Stephen Lowry, from the University of Kent, said the evidence suggested "a solar system origin, most likely from the asteroid belt between Mars and Jupiter."