One Direction get number one single 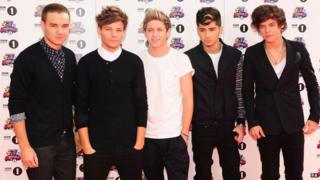 One Direction have gone straight to the top of the singles chart with One Way Or Another.

The cover, which is this year's official Comic Relief song, sold more than 113,000 copies, making it the fastest selling single of this year so far.

It's the third UK number one for the boy band who performed the single for the first time at the Brit Awards.

Red Nose Day takes place on 15 March with celebrities and people across the country fundraising to help people in Africa and here in the UK.