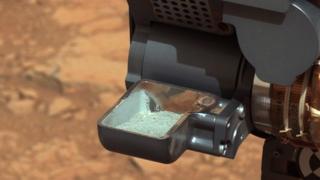 The Mars rover has drilled its first bit of powder from inside a rock that may have been formed by water, scientists say.

It's a big deal for the Mars rover, Curiosity, because water is something that suggests the planet could have once supported life.

The rover, which is on Mars for two years, used its powerful drill to get inside the rock.

It's hoped that by analysing the powder, scientists will be able to learn more about the planet.