Liverpool out of Europa league despite amazing comeback 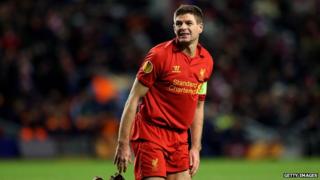 Liverpool have been knocked out of the Europa League - even after an amazing comeback against Zenit St Petersburg at Anfield.

They went a goal behind, but came back to win 3-1, which means they still lost the match over two games.

Tottenham needed a last minute goal to go through to the next round against French team Lyon.

Chelsea will join them in the last 16, as will Newcastle who beat team Ukrainian Metalist Kharkiv.