Scientists from the UK have found the deepest ever group of sea vents.

The vents, which are like underwater chimneys, spurt out dark water way down at the bottom of the Caribbean Sea.

And by way down, we mean WAY down. The vents were found three miles below the surface!

They were discovered using a state of art ship that can monitor the ocean bed using a special submarine, and you watch a special tour above.

The ship, named after famous explorer James Cook, contains the very latest technology that allows scientists to study further down than ever before. 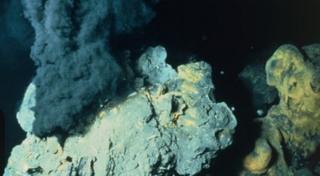 Vents spill dark water into the sea on the ocean bed

And one of the most amazing discoveries has been of the 10 metre high chimneys that spill out warm water.

Officially called Hydrothermal vents, people didn't even know they existed until about fourty years ago.

Since then, about 200 groups have been found, but none as deep as those discovered in the Caribbean.