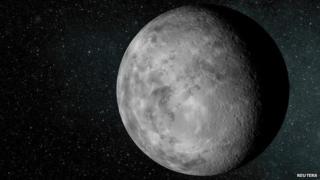 Astronomers have smashed the record for the smallest planet discovered beyond our Solar System.

Kepler 37b is slightly larger than our Moon and was discovered by the Kepler telescope.

To spot the exoplanet - that's a planet outside of our Solar System - astronomers looked at the tiny variations in light from the star that the planet is orbiting.

They then use this information to figure out its size.

The record for smallest exoplanet is often being broken these days as astronomers get better and better at finding them with the Kepler space telescope.

The telescope stares at a fixed part of the sky, trying to detect tiny dips in stars' light that happens when planets pass in front of them, and has been recording data for almost four years.