Dolphins 'whistle to find loved ones' 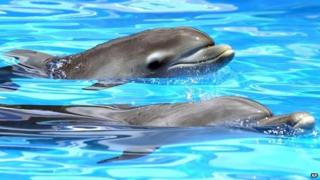 Dolphins mimic the sounds of their loved ones to find them, according to new research.

Scientists from Scotland and America studied the whistles of wild and captive dolphins.

They found that those who copied each other's sounds were mothers and their offspring, and adult males who'd known each other for a long time.

The findings suggest that mimicking whistles is done by dolphins who want to be reunited with each other.

It's already known that dolphins develop their own individual whistle which describes their identity.

Scientists also found that there were slight changes in the copied versions of whistles, which could be to avoid confusing other dolphins who might be listening.