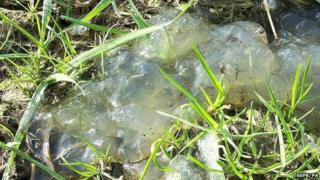 A weird slime that's been discovered at a nature reserve is baffling scientists!

Piles of translucent jelly have been found dotted around grass banks at the RSPB's Ham Wall, near Glastonbury in Somerset.

No one is sure what it is. One explanation is that it's a form of bacteria called Nostoc.

Other ideas are that it's the insides of frogs and toads, or it could be related to the crystal brain fungus!

Visitors to Ham Wall are being advised not to touch the slime and to report it to nature reserve staff.

Tony Whitehead from the RSPB said: "Although we don't know what it actually is, similar substances have been described previously.

"In records dating back to the 14th Century it's known variously as star jelly, astral jelly or astromyxin.

"In folklore it is said to be deposited in the wake of meteor showers."