Rescued oil birds set to be released in a few weeks 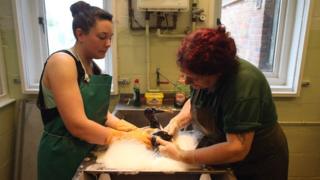 Dozens of rescued birds, that were washed up on the south coast covered in a type of oil, could be released back into the wild in a few weeks.

The animal charity RSPCA has cared for more than 300 birds that were covered in the sticky substance.

It happened earlier this month, and at first no-one knew what the glue-like stuff was.

It was later discovered that it was a type of oil, but it's still not clear where it came from.

About 200 birds survived and staff at rescue centres are working hard to get the birds strong enough to go back into the wild.

As well having the substance cleaned off them, a lot of birds are in a weak state and struggling to eat and drink.

The animal workers are monitoring their health, feeding them and making sure they get plenty of water.

Then once the birds are back to a healthy weight and they can fly again, they will slowly be released back into the wild.

The RSPCA says it hopes this will be within the next few weeks.