Shock results in the FA Cup 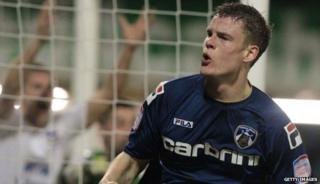 There were some shock results in the FA Cup on Saturday.

Oldham snatched a late goal to draw 2-2 against Everton and Blackburn beat Arsenal 1-0 to reach the quarter-finals.

Luton Town's remarkable FA Cup run came to an end after they were knocked out by Championship side Millwall 3-0.

And League One team MK Dons saw their FA Cup dreams come to an end losing 3-1 to Barnsley.