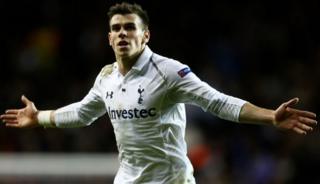 Spurs took the lead just before half-time and looked in control until Lyon struck back in the 55th minute.

With the game moments away from finishing Tottenham received a free-kick and Gareth Bale smashed the ball into the top corner.

Tottenham will face Lyon again next Thursday for the second leg.

Man of the match: Gareth Bale

Tottenham weren't the only British club in action last night.

Liverpool wasted chances as they went down 2-0 to Zenit St Petersburg and Newcastle could only manage a goaless draw with Metalist Kharkiv.

There was good news for Chelsea - they beat Sparta Prague 1-0 after substitute Oscar scored after only being on the pitch for 45 seconds.