An asteroid the size of an Olympic swimming pool whizzed past the Earth on Friday.

The space rock known as '2012 DA 14' zoomed past at a distance of just 28,000 kilometres - the closest ever predicted for an object of that size.

It wasn't travelling slowly either - racing past at a blistering 7.8 kilometres a second. 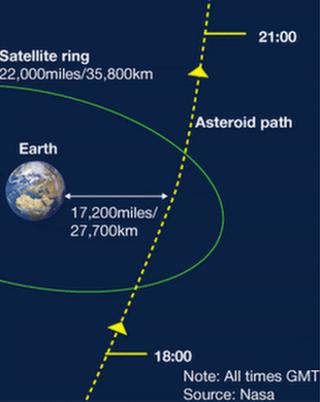 NASA streamed live pictures of the event on the internet.

The asteroid was first spotted in February 2012 by astronomers at the La Sagra Sky Survey in Spain and orbits the Sun in 368 days - but doesn't orbit in the same path as the Earth.