Obama says half of US troops in Afghanistan will go home 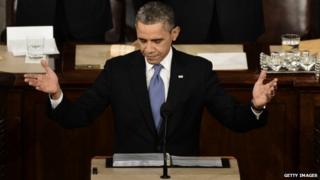 The President of the United States says he will send more than half of the US troops based in Afghanistan home over the next year.

President Barack Obama made the announcement as part of his annual State of the Union address in Washington.

He said by that time "the war will be over".

Mr Obama said the remaining soldiers will still help with training and counter-terrorism.

The Afghan defence ministry spokesman, General Mohammed Zahir Azimi said: "We welcome this," after the speech.