Do you think school award ceremonies should be banned? 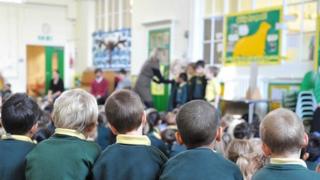 Medals on sports day, certificates in assembly or stars on your report card... school prizes are used to celebrate your success and hard work, but not everyone gets them.

A church leader says award ceremonies are bad for schools because they can leave some pupils feeling left out.

Rev Dr Hugh Rayment-Pickard, who is a Christian, said church schools shouldn't hold ceremonies that mean only a few children get prizes.

He believes that it is against his faith to award only a handful of people, and he thinks it is only fair if everyone gets to celebrate their achievements.

What do you think of his suggestion? Do you think it is fair that some pupils get prizes and others don't? Have you been given an award at school, or do you always feel left out?

"I think all those people who say they have not gotten an award before and say it is unfair should try harder. I think it should not be banned because I get an award every year and I work very hard and it makes me fell proud. Furthermore, it's great to celebrate your achievements."

"I think that school awards are good but you should only be allowed one award because this year, in my year of 300 there was twenty awards and I received 3 of them, this was very unfair on everyone else."

"I think they should be banned totally, it's so unfair because when I go to school and we have them, I always feel left out and I remember in reception and Yr 2 I cried because all my friends had one apart from me."

"I don't think that they should be banned because if someone that hasn't got an award before wants one, they should work for it! If a child knows that there is an award the end of the challenge, they might do better in the challenge!"

"I think that it is ridiculous that awards should be banned. Competition is a good and important part of life because if it did not happen then we would have nothing to strive for and also, the people who do good work wouldn't get rewarded fairly."

"I think school awards should be banned because some people don't get them then they upset those who don't. Even merit marks are no good because at my school people start turning it into a race to see who can get the most my the end of the year."

"I think they should not be banned, as people who work hard in lessons and get good grades should be awarded for their hard work."

"Awards at the end of the school year are always a motivator. They encourage pupils to work hard and even if you don't win, you may have tried harder knowing that there was a possibility of a reward. They push you harder than the all too common 'that'll do' attitude."

"I get what they are saying but i don't think they need to go this far because children should know that just because they did not get a award it does not mean that they are really bad at things."

"I think they should get them because it rewards good work and if they get awards the other pupils will try and earn awards too because they will want something to be proud about."

"I don't think awards should be banned. If you don't get one try your hardest and you too might get one."

"No we don't think they should because it's something someone works towards and wants to achieve. If they were banned then the effort in work would decrease dramatically."

"I think school awards shouldn't be banned because pupils work very hard for them and they deserve to be rewarded. On Tuesday we had rewards day for everyone to participate in so no one was left out."

"I think school awards should not be banned because pupils work hard to earn them."

"I think that it is perfectly all right to award only a handful of pupils at a time, because they are awarding students who have worked hard and reached a milestone in their school life already. If you awarded everyone at the same time, it wouldn't be as special to students who had got the award a while ago. Award ceremonies are to award a few people awards for their hard work and effort, not for awarding everyone with the same award. Everyone will get the award, but some sooner or later than others."

"I think it's ok for other people to get awards because if you're patient you will get one yourself eventually!"

"I always feel left out because I never get one."

"I think that school awards should be banned because it is always the same people receiving them so it is always unfair on all the other children who do not get anything at all."

"I think they should have awards as long as the schools make sure that the other children don't feel like they are not working well enough. I got an award at my school this year and it makes you feel like your hard work has paid off, but I think children who win awards shouldn't show off too much."

"I don't think school awards should be banned because if they were banned children might start slacking at work or behave badly."

"I think that school rewards are good, they help us try harder to get a good result, but when people don't get them it makes you think what have you done is wrong and ask why haven't I got one!"

"I think it should be banned as well because I know how it feels when you don't get rewarded. Just because we don`t achieve as highly as other people doesn't mean you don`t work as hard, plus it`s the teachers opinion anyway."

"I think you should get awards because hard work and effort should be rewarded."