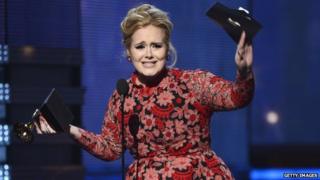 It was a great night for British acts at the Grammy Awards in Los Angeles.

Adele picked up the Best Pop Solo award, while folk rock band Mumford and Sons took home the Album of the Year prize.

The event kicked off with Taylor Swift singing her hit We Are Never Ever Getting Back Together.

She was joined on stage by performers on stilts, a White Rabbit and human puppets for an Alice in Wonderland-themed routine.

Other award winners included Gotye featuring Kimbra who won Record of the Year with Somebody that I Used to Know.