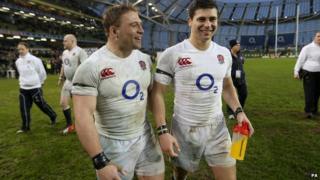 England are the only team that can still win the Six Nations Grand Slam after they beat Ireland 6-12 on Sunday.

It's the first time England have beaten Ireland away since 2003.

Owen Farrell kicked all of England's points, with four penalties enough to hold off the Irish.

England Head Coach Stuart Lancaster is now looking to make home advantage count in the team's next match against France.