Has the horsemeat scandal made you worried about your food? 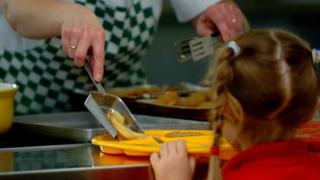 Has the horsemeat scandal made you worry about what you eat?

Companies which supply food to many UK schools say they're confident about the quality of meat served in their lunches.

The Local Authority Caterers Association say there are strict guidelines on school food safety, including the tracing of ingredients.

They've said they're "as certain as can be" that their caterers haven't bought meat from any of the companies involved in the scandal.

Supermarket chain Aldi has found horsemeat in two more of it's frozen ready meals too.

They think that the meals came from the same supplier as Findus' frozen beef lasagnes which were found to contain up to 100 percent horsemeat.

Prime Minister David Cameron has said that "there is no reason to believe that any frozen food currently on sale is unsafe or a danger to health".

The Government Minister in charge of food called it unacceptable and warned more horsemeat could be found as other products are tested.

We asked your comments and loads of you got in touch.

"I don't mind eating horsemeat as long as they tell you it is in the food instead of lying and saying its 100% beef!"

"It's revolting, I'm really careful about what I eat now."

"I am really worried about this. I have just started having school meals but now it has put me off!"

"I'm just very shocked that they did it. Why would they replace cow meat with horse meat?"

"I have lost trust in the makes of food including horse and the shops who are selling it!"

"I think it's fine because it is still meat and it tastes exactly the same so what is the problem. The only difference is a horse goes 'neigh' and a cow goes 'moo!"

"I wouldn't really mind because, I have eaten horse meat before, and it tastes just like beef!"

"I think it's horrible that there is horsemeat in food and we didn't know about it."

"I don't mind if I eat horsemeat as long as it's safe."

"I have never really thought about what kind of meat I have in my lasagne or burgers but now this has happened I think we should get more information about what we eat."

"The French eat horsemeat. I would gladly try it, if I knew at the time that is was horsemeat."

"My mum says that we are not having any processed food until it has all stopped."

"I love horses, and would NEVER eat them because I think it would be cruel. We should always know what we are eating, and always have the choice!"

"I don't really mind about the horsemeat. A dead animal is dead animal but the bad thing is that they didn't tell us about it."

"I thought I could trust food companies products, but now, whatever it says on the packaging I don't believe."

"I have been put off all beef at school as I love horses and think it's horrible how people can use it as a substitute for other meats like beef!"

"I'm not worried, more shocked that this hasn't been found out sooner."

"I'm not that bothered because if you get meat, you get meat. What's the deal if you can eat it?"

"I would never eat horsemeat it would be horrible!!"

"I think we should have more information about what is in our food because a lot of people love horses and would hate to eat horsemeat."

"I'm not worried but I love horses so I don't want to eat horsemeat. I'm glad people are testing it."

"I don't mind eating horsemeat as long as I know what I am eating is what it says it is."

"I think that if we are going to eat horsemeat then it's our choice, them not telling us is what's wrong with the whole thing."

"I'm worried about the horsemeat because I love horses and I wouldn't dare eat them."

"Yes, it has made me worry about the meat I eat."

"At school the meat tasted and smelt funny so everybody was put off because we all thought it was horsemeat. I'm going to give up meat for a bit so I have less chance of having it."

"I'm not very worried about it because I have eaten horsemeat in France and it tastes really nice. "

"I got put off burgers at school, I think having horsemeat in your food is disgusting."

"I am really worried whenever I eat meat in case it has horse meat in. I this it's disgraceful that they put horsemeat in burgers."

"I don't really want to be eating horse. I also want to know what I'm eating."

"I wouldn't eat horse meat EVER I would feel sick."