Should celebrities be allowed to ban embarrassing snaps? 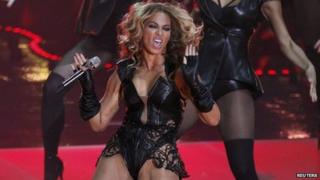 Beyonce's publicist has asked for embarrassing photos taken of her performing at the Super Bowl to be removed from websites.

In an email to one site the star's publicist said "There are some unflattering photos on your current feed that we are respectfully asking you to change".

Some photo agencies have already stopped selling the images.

It's not usual for celebrities to ask for embarrassing photos to be removed from magazines or websites.

Do you think celebrities should be allowed to chose which photos of them we see?

Should embarrassing snaps of stars be kept secret? Or do you think it's fair for websites to show any pictures they want?

This chat is now closed. Thanks for all of your comments.

"I think they should wear decent clothing, so any pictures taken wouldn't be embarrassing"

"Celebs are normal humans just like the rest of us, and we don't get everything the way we want it, do we? I don't get why she is making such a big fuss over abserlutely nothing!!!"

"I think celebrities should be more careful in what they do so that they don't get embarrassed."

"It's a nice change to see celebrities not looking perfect and airbrushed. It's very important to see that they're just like the rest of us, and unflattering photos help us to understand this. Why can't celebs just laugh it off?"

"Why should celebs be able to take away embarrassed pictures when normal people just put up with them? The celebrities are trying to make out that they are perfect but no one is and they have to face the truth."

"I think the celebs should be allowed to ban any pictures they don't want the world to see. Maybe the websites and newspapers should have to get permission from the stars before they publish them?"

"Celebrities should just leave them, normal people can't do anything about it, it's funny anyway!"

"I think that we have to remember that celebrities are humans as well so they should get to choose which pictures of them are shown on sites."

"I think that celebs should choose which photos they want the public to see because say if something went wrong and something very embarrassing happened you wouldn't want the WORLD to see."

"I think they should do what they want because it's there life not ours! It's really up to them not us!!"

"Celebrities should be able to choose because some photos you don't want the world to see. It would be embarrassing!"

"I think superstars should choose for themselves. I don't think they should have posted those pictures."

"Maybe it wouldn't be such a big deal to celebrities if people didn't make such a drama about everything."

"I think celebs should be able to choose which photos of them should be shown."

"Well some pictures are funny."

"I think celebs should be allowed to choose."

"They shouldn't be kept secret. Celebrities are human like everyone else, we all have some embarrassing pictures. Also, celebs know that hundreds of people are going to be taking pictures of them, they're not all going to be perfect! That's part of their job."

"I think stars should get to choose which photos are seen by the public because it doesn't seem fair that embarrassing photos should be seen by everyone."

"I think that celebrities should be allowed to choose. We wouldn't like it if they put an embarrassing picture of us on the internet, so it's the same for them!"

"I think it is a good idea to ban embarrassing photos because in the end they are their personal photos."