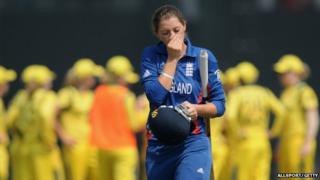 England's cricketers have lost again at the Women's World Cup in India, meaning their chances of making the final are now very slim.

England lost to Australia this morning by just tow runs, severely damaging their chances of defending their world title.

England bowled well to leave themselves needing just 148 to win the match.

But poor batting cost them the match and England now need results to go their way to make the final.

Chasing 148, England had earlier been reduced to 39-6, but patiently fought back to keep their hopes alive.

However, Australia were able to strike the final, telling blow and bowl England out for 145, three runs short of their target.

Australia now top the Super Six table and are on the verge of making the final.

If England are to join them, they'll need to win their remaining two games against South Africa and New Zealand and hope other results go their way.