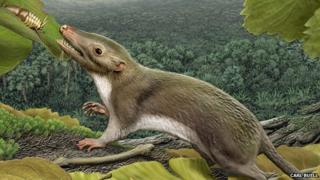 Scientists have released an image of what they think could be one of our earliest ancestors.

The creature is thought to have appeared on the earth over 65 million years ago, just after dinosaurs became extinct.

The tiny, furry animal had sharp teeth, a long tail and ate insects.

Experts think it could be the first placental mammal, which means it gives birth to its young rather than laying eggs, or carrying them in pouches.

If they are correct it would mean than all 5,100 species of placental mammals, including humans, dogs, cats and even whales could have this little guy their ancestor!