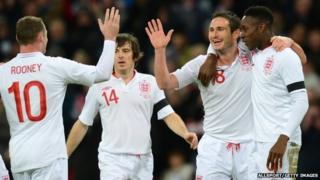 England's football team are celebrating their first win over Brazil in 23 YEARS!

Wednesday night's friendly match at Wembley ended in a 2-1 victory to the hosts.

Wayne Rooney took England into the lead during the first half.

Brazilian striker Fred levelled after the break, before a spectacular strike from Frank Lampard put England back in front.

It was also a big night for Ashley Cole, who made his 100th appearance for England.

In other results, Scotland beat Estonia 1-0 thanks to a goal from Charlie Mulgrew.

Wales' Gareth Bale and Sam Vokes both scored in their friendly to beat Austria 2-1.