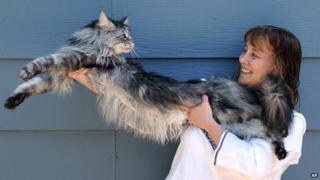 The world's longest domestic cat, named Stewie, has died at the age of eight.

Stewie - from Reno in Nevada, USA - was awarded the record by the Guinness Book of Records in 2010. He also held the record for world's longest cat tail.

"Stewie was always very social and loved meeting new people," Ms Hendrickson said. "He has touched many lives, and for that I am grateful."