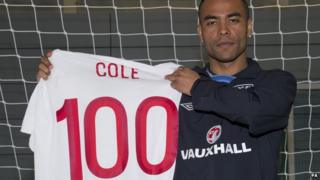 The Chelsea star is going to pick up his 100th cap when England take on Brazil at Wembley.

Cole will join a select club of England players who've got 100 caps.

It's only a friendly, but the players will want to impress boss Roy Hodgson ahead of two World Cup qualifiers in March.

Jermain Defoe, Daniel Sturridge and Michael Carrick have all had to pull out the squad because of injury.

Brazil are set to host the next World Cup in 2014.