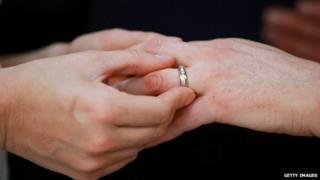 Same-sex couples in England and Wales can currently have a civil partnership.

A civil partnership offers similar legal rights, but isn't exactly the same as marriage. If this vote becomes a law it means same-sex couples will be able to get married in a church.

The Prime Minister David Cameron wants the marriage plans to go ahead in England and Wales, but it's causing big divisions in his own Conservative Party as many of his own MPs don't agree and 136 voted against it.

Even though the vote has gone through, there's still a way to go before same-sex marriage becomes law.