Which computer game character would you bring to life? 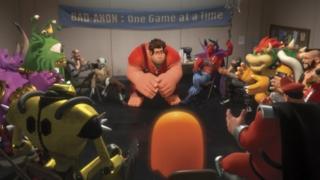 Wreck-It Ralph is an animation about a bad guy called Ralph who is actually a really nice person.

He's fed up of being seen as the bad guy, so he breaks out of his game and goes on an adventure!

There are loads of famous characters from massive computer games you will recognise.

Joe's been to meet the director and actors to show them your ideas for the famous faces you'd like to see if Wreck It Ralph has a sequel!

Comments are now closed, but check out Newsround on Saturday to find out what they thought!

"I would like Yoshi to come to life because he would be able to eat all of my vegetables!!!!!"

"I'd like to see King Kong come to life! And Princess Peach could come to life and I think she'd be very bossy and picky and posh!"

"I'd like to see the guy from temple run, he would be like really tired from running from the creatures. He'd be very enthusiastic and would bring out the treasure he got!"

"I think in the next movie we should see Steve from Minecraft because everybody loves him and he's very adventure type person and is really brave!!!!"

"I think I would be Donkey Kong because he can smash and break anything in his way. Also he is a brilliant character and well just really AWESOME."