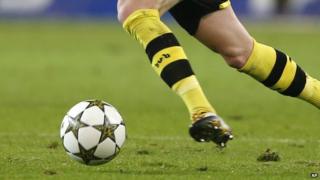 A Champions League tie played in England is one of hundreds of football games that European police say were fixed.

They have been investigating for the past year and a half, and say they suspect that 680 matches were fixed.

Police think an organised crime group in Asia is behind the scam.

It's thought the group has been working with criminals gangs in Europe and so far about 425 people could be involved.

They say the fixed Champions League tie in England took place in the last three or four years, but did not say which one because it's still being investigated.

Match-fixing is a form of cheating and sadly it has been found to happen in many sports.

It usually involves a group of people working together to make sure the game goes their way - normally so they can make money by betting on the outcome.

This can sometimes mean a team will deliberately lose or even that the number of goals that are scored was decided before they play.

In the UK it is a serious crime and can lead to jail.