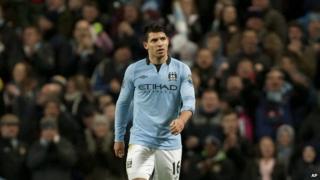 Manchester City dropped points in the Premier League title race with a disappointing 2-2 draw against Liverpool.

It took a brilliant late equaliser from Sergio Aguero to rescue a point for the reigning champions.

It could have been a lot worse for City, as Liverpool lead with goals from Daniel Sturridge and Steven Gerrard.